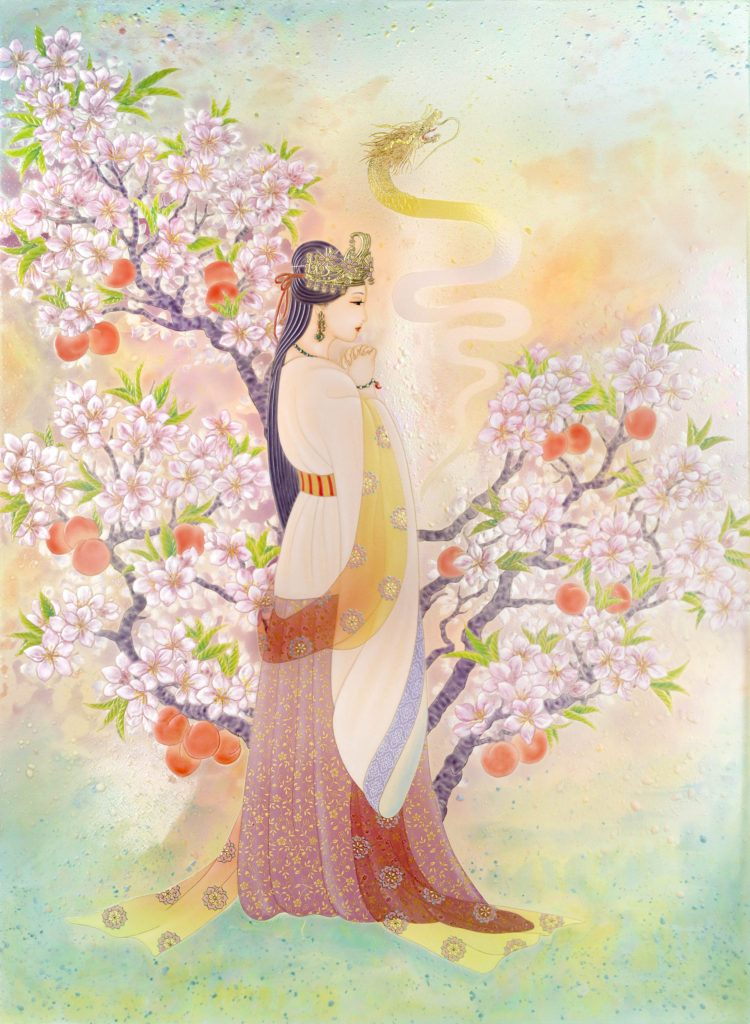 Thanks to you, Toasiga (the art originally established by Hisakazu Kusaba) has reached 33 years.

In the West, 33 is called an angel number and is an auspicious number.

The 33rd anniversary is also important in Buddhist memorial services.

●Iwanaga-hime is a symbol of “life”

Oyamazumino-kami gets angry and tells Ninigino-mikoto:
“I married my two daughters to you with a pledge that your life will be as long as one of a rock when you make Iwa(rock)naga(long)-hime your wife, and if you make Kono(tree)hana(flower)sakuya(bloom)-hime your wife, you will prosper as blooming flowers on a tree.
If you only marry Konohanasakuya-hime, your life will be as ephemeral as a tree flower. ”

Konohanasakuya-hime symbolizes the prosper of a generation like flowers on a tree, the finite life (from) in the visible world.

On the other hand, Iwanaga-hime is life ‘itself’, and she is a symbol of infinite life (great life) of circulation and reproduction.

The theme of the 33rd anniversary work was “great life”, and chose “Iwanaga-hime”, a symbol of great life.

I named the works on Iwanaga-hime,”Princess of Momoka”.

In China, peaches are the fruit Xiwangmu, a fairy of Mt. Kunlun, and are long-lived secret fruits that bear fruit once every 3,000 years.

Since ancient times, it has been a symbol of vitality, and it has been believed to help the movement of life by driving away the spirits of disease or evil.

Peaches appeared in Kojiki(the oldest history book of Japan) and Nihon-Shoki(Chronicles of Japan) in Japan.

According to Kojiki, when Izanagino-mikoto went to Yomi no kuni (the nether world in Japanese myth) to bring back the dead Izanamino-mikoto, he was chased by a demon.

And when Izanagi reached “Yomotsuhirasaka”, the boundary between the erthly world (live) and the world of Yomi (death), he took three peaches from the peach tree and threw them towards the demon. And then the demon ran away immediately.

As a result, the peach fruit has also been named “Okamuzumino-mikoto”.

In addition, In 2009, a large number of 2,800 peach seeds were found at Makimuku ruins in Sakurai City, Nara Prefecture, which is one of the candidates considered where Yamataikoku used to exist.
It is clear that peaches had been used as valuable items for rituals of religion ,festivals and magic since ancient times.
In China and Japan, there is something that can be said to be “peach faith”, both of which are themed on life = regeneration
.

● The Legend of Momotaro

For Japanese people, the most familiar thing about “peach” is Momo(peach)taro and Peach Festival.

Momotaro’s story is said to have its origin in aforementioned myth of Izanagino-mikoto.

It was established as an oral folktake by the end of Muromachi period, and it was made into monadic format in Edo period. And it was adopted in the national textbook in Meiji era.

Thus, I think that the concept and the view of “demon” in this story have changed as it has passed through a number of eras.

The origin of it could be “something extremely frightening “.

Fear can be reverence, in other words, “fearful things” may be beyond human power.

And demons also indicated unfamiliar matters; indigenous people, people from overseas, drifters. Those who were to be excluded by the rulers.

Furthermore, they have become ‘who do evil things’.

In the history of the winners, demons became ‘who are to be exterminated’.

It is the “demon” that a concept of relative has created; one side to exterminate (us) and the other side to be exterminated (them) .

● Life is flat. There is no beauty and ugliness in life.

Every life is born from great life, and it returns to great life.

In a big, huge cycle, life in the past and life in the future are connected holding each other.

It is a world of “Dai-seimei (great life)” without high and low, no top and bottom, no right and wrong.

However, we had lost the view of the original ‘life’ by being trapped in a relative concept and making Konohanasakuya-hime and Iwanaga-hime into something relative as beaty and ugly even though they were both “absolute” existence of life.

Thinking about the existence of demons may be an opportunity to reconsider such a viewpoint.

Such a thing have come to my mind from the folktake.

● Thoughts entrusted to Princess of Momoka

It is said that now the time has changed from the age of Land which we put value on the visible tings to the age of Wind which depends on heart and soul now.

Well, what changes the times then?

In the age of Land, there was a belief that it was “civilization” that changed the time.

Because “wealth” was what we were looking for.

In another word, it was something can be consumed.

As consumers, we have been chasing the wealth.

Life (nature and humans) were also subject to consumption as well.

The criteria for selection and discrimination are arrogant and is based on relative values such as “can do or cannot do “, “useful or useless”, “sperior or inferior”.

I think that the distinguishing between visible beaty and ugly, the perspective of the winner that makes unfamiliar things into demons, and the structure of exclusion are also due to such relative values.

The time seem not to be certain anymore and to have moved on to the next stage.

Let’s let the flower of life bloom while we take the miracle that we be here and the joy to our heart.

The flowers of everyone’s life are as beautiful as Princess of Momoka.

The eternal thing, my life.

My heart is the great universe and my hometown… Dai-seimei(great life).

Your presence is the very wish and prayer of great life.

We are going to introduce a series of “Momoka no hime, Iwanaga-hime” as 33rd year anniversary!
Please look forward to it.