If there is something can be called “color of extreme gentle”, I may say that the Tosaiga “Ryuge” embodies exact of that.

The torus surrounded by gold stamen protecting the Usumoegi-color (bright light yellow green) like a young leaf that has just bloomed, the inner petal with gradation from the lightly-yellowish-cream color at the root to the light pink color at the tip, like a fresh white peach with the hair, and the outer petal which changes from the glossy light red plum color to the graceful, transparent wisteria color.

A dragon that carefully hugs the large lotus flowers, which are proudly beautiful with petals spreading over and over again, like a guardian of the treasure hall.

The dragon also has an unspeakable mysterious beautiful color.

If I can compare, it is like a spring dawn with a curtain of fog all over the sky and put it in crystal opal, or like the scales that are decorated with the glow of iridescent pearls.

It can be softly blended with the pure lotus flower in a harmony, but at the same it just lays there with a strength and presence different from the delicate and elegant lotus flower.

This Tosaiga “Ryuge” is also a representation of the theme of life of the artist Kazuhisa Kusaba.

More precisely, it depicts the firm relationship between the ways of life; the ones that are born from “life” and the others watch over and bare all the things embraced by “life”.

Kusaba used to travel through Asia in search of the origins of Buddhist art, and it was the lotus flowers that he had reached.

“Pure heart”, “Rest”, “Sacred”, “Eloquent”, “Deposition”, “Salvation”… As it has diverse in the language of flowers, lotus flower might be the rare flower with a lot of anecdotes.

Especially in the east of the Orient, it has been considered a sacred flower meaning “regeneration” and “rebirth” since ancient times.

In India, the lotus was considered a symbol of “what it creates” and a belonging of Mother goddess because the pattern of the leaves resembled the human placenta.

In Buddhism, it was likened to oversading hardships and gaining enlightenment, that is, being reborn as a Buddha, from a pure figure that blooms large flowers only in sludge rather than in fresh water.

There is also a saying that those who do good deeds will be reborn on lotus flowers after death.

It is said that Buddha’s disciples tried to express the origin of the universe and enlightened essence by entrusting them to lotus flowers.

Also, in mandala, lotus means the origin of the universe.

In ancient Egypt, it was said to be a flower of the Sun god and symbolize “eternal rebirth” and “immortal soul” from the appearance of sinking in the water at night but rising again with the sun and blooming.

The center of the lotus flower is the center of “life” which transcends time and space, and each petal is the one that embodies the desire, and the spread of “life” itself. And the lotus as in immortal “life” blooms with fragmant more and more majestically and dignifiedly by opening the petals in all directions.

The dragon in “Ryuge” has a gentle look compared to the dragons of other works by Kusaba.

Some people say that they feel motherhood in the figure that hugs the flower and lays gently so that sharp claws do not damage the lotus instead of stepping on it.

However, as for Kusaba, he wanted to draw a dragon as an existence to protect and create, not a mother dragon.

Motherhood to hold a child in her soft chest, fatherhood to protect the child from enemies, both of which combined, led and rejoiced in the growth of the children. I placed a dragon on the lotus;”life” as a gentle being who tries to give to the children the protection once granted by its parents.

When I realize that not only the body but also the soul is the main part of “life”, and that I am a part of life that continues to the next generations regardless of whether I give birth to the child and raise directly, with the eyes of sacredness,”I” ascends to existence which embrace “life” and protect it beyond motherhood or fatherhood, a small frame of being a human being and speciation .

Life sprouts and grows healthy, blooms strongly and beautifully, protects and nurtures the buds of the next life, and leads to life beyond.

Although individuality and individual thoughts exist, by harmonizing and blending with other lives, more beautiful “life” appears.

The existence that comes out of “life”, lotus, and protects “life”, that is a dragon, and “I” who realized and became a dragon, should be able to live in joy believing that the lotus will not wither and will surely bloom.

When we are genuinely moved by how beautiful the world and “life” are, we will naturally appreciate our lives and want to cherish it.

Putting aside such a difficult story and reasoning what the lotus flower and dragon mean for now, I want you to regain the joy of living by awaken the excitement and the heart that feels something is beautiful.

Being logical is of secondary importance. I want you to be fascinated by the lotus that seems to release an elegant fragrance, fall in love with the enchantingly vivid dragon body and to admire the luster and shine from different angles.

If “Ryuge” is a beloved work, I feel that “life” can be cherished.

May the beauty and kindness of “life” entrusted to “Ryuge” move your heart.
May you become wide open petals and wear lotus, “life” more beautifully.
May you become a gentle dragon and a guardian of the lotus. 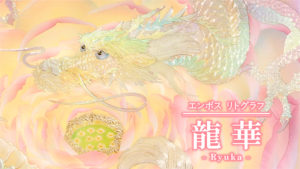