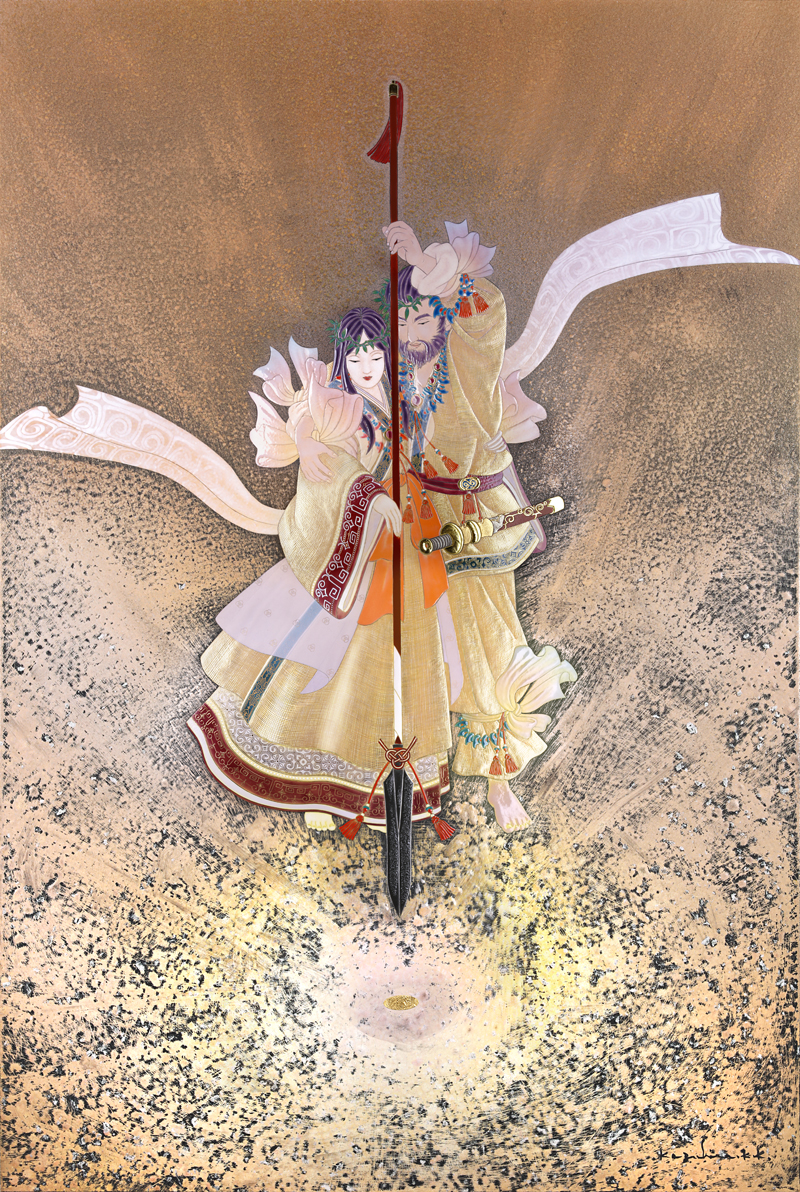 What is Izanagi and Izanami trying to tell us today?
There is a mellow world that can be expressed because he has been facing the mythical world for more than 30 years.

Myths speak for them.

We entered a new era and thought about what kind of era it would be, over mythology.

In the age of the Gods, the first one that appears is the “”invisible”” god named Ameno-minaka-nushi.

The fact that it’s invisible is very important and invisible Gods appear more and more later.

It corresponds with the quantum mechanics of modern physics in the scientific world which evidence the fact there are invisible function in creation of materials in this world.

From the world of the “invisible gods”, Izanagi and Izanami first appeared as “visible” Gods.

These two gods give birth to the nation and cause a phenomenon.

When they creating a nation, they attempted and achieved all kind of things until they created splendid gods.

And, as you all know, they stared thinking, “We have longcomings and shortcomings, let us complement each other”

I had always thought that this was the ritual of sex, but I realized that this was “concord””, and that the big key of “great harmony” was shown here.

People who make “oneness” as their ideal, they are likely to think that “everyone’s the same, and we are one”.

However, let’s think about how is the world of “Oneness” actually created?

It is a combination of different things, and they complete the world of one big “concord” = “big harmony”.

“Oneness” is the whole, and the whole is nothing but a “set of differences”.

I think that’s one of the messages from the myths.
I think they are trying to tell you the importance of accepting “each one is different.”

“In history, there have been repeated claims that “you have to be the same as I am”.

Everyone thinks that “my justice is universal and my answer is correct”.

But it is only when we understand that everyone’s different that we can come together to create concord and harmony.

It made sense to me when I realized that those teachings are shown in the myths.

I hit me to think, “Now is the time to draw it,” and this time I created a work called “Musubi Izanagi Izanami”.
”
“It’s natural that people have different value judgments and perspectives depending on the environment in which they were born and raised and the experience they have had.

The problem happens such as fights, conflicts and falling into loneliness when we forget the fact that “we are different” and assume that “everyone’s the same”.

War is repeated, insisting that “We are the justice” and “My God is absolutely right.”

The structure of human’s brain and our habits lead us to do so.

But what is justice in the first place? Justice for who?

Unless you understand that value judgments and perspectives are different for each person, we can’t share the table.

Only when we understand it, we can hold each others hand.
I believe that we can create peace=harmony in this world by being aware of the fact that one thing can actually look different because each person has a different perspective.
And from that point, we can connect each other to have a strong bond on understanding.

I think that the myth of Izanagi and Izanami is telling us about it.

In a new era, we must understand the differences between us and move to direction where we can complement each other to create a world.

After World War II, no one told us about the content (meaning) of the lyrics of the national anthem “Kimi-ga-yo”.

In school education, “Kimi-ga-yo” only appears at the end of music textbook.

And the situation is still same even now.

The origin of “Kimi-ga-yo” is in “Kokin-wakashu (Collection of Poems of Ancient and Modern Times in Japan)”.

“Kimi” can be either a woman or a man of admiration, but at that time, people used to call someone important “kimi”.

If you add the two last sounds of Izanagi and Izanami, it will become “kimi”.
I figure that 1,300 years ago, people called a from, in which a female and a male in “harmony” or two different components in society “harmonized”, as in “kimi”.

Therefore, I think people actually had been singing this song as a celebratory song for a long time just like “Takasago(classic noh play by Zeami)”.
“Kimi-ga-yo” goes like this; “Chiyo ni yachiyo ni, Sazare-ishi no iwao to narite, Koke no musu made “.

And there goes another important word here “musu” that appears in names of Takamusubino-kami, Kamimusubino-kami.

If you steam (musu) the rice, it will get soft so that you can eat.

When you pass down lives in “harmony”, it will start to ‘musu’.

It’s not just about men and women, it’s in our world.

It is necessary to understand the differences and to build firm bond(musubi) in the coming future.

The word “diversity” is often used, and it is natural that there are various different ways of thinking and thought.

Because at the end of the day, we are a collection of people with different backgrounds and different lifestyles.

I think we can finally harmonize only if we recognize it and also the fact that we are all in one big flow as in ‘LIFE’ to build the ideal world in ‘great harmony’.”

When Izanagi and Izanami bore the nation, the first island that appeared is written as “O-no-go-ro-ji-ma” in the myth.
It is considered that the island is current Awaji island where “I-za-na-gi-jin-gu” is enshrined.

I drew a string tied to the tip of the pike in “Musubi Izanagi Izanami”, and this is a way of knotting called “Awaji-musubi(Awaji Knot)”.

It is used on Noshi-bukuro (papers put on gifts), and is one of Mizuhiki (decorative Japanese knotted cord ) used for celebration, which is said to be quite old method and was made of hemp yarn.

In western world, it is a “ribbon tie”, but “ribbon knot” can be solved by pulling both ends.

However, I thought that it was interesting that this Awaji-musubi tightened more and more when both ends were pulled, and the knot (bond) become actually stronger.

And in this “Awaji-musubi”, when you tie two circles, another circle is born.

In a word, it is made of three circles.

It seems to symbolize that a new world is born when the two worlds are connected, and it was very interesting so I drew it at the end of the pike.

Myths are all over the world, and everyone thinks, “Is this real? Is this true history?”, but for me, that doesn’t really matter.
“To pursue philosophy as an artist is separated from the reason-prioritized-world, and is to instinctively receive messages from gods without stereotypes to be inspired as an essence of creation.

In that sense, Japanese mythology is wonderful.

I think a lot of myths including ‘Kojiki’ can be interesting to everyone because all you need is imagination to approach the essence as close as you want.

It is also a rediscovery of what should be in our sensibilities since ancient times.

In this work, “Musubi Izanagi Izanami”, with an inspiration from the myth about a man and a woman bear a nation by complementing each other, I expressed the awareness that the world with ‘concord and great harmony’ can be born by understanding the differences between each of us and knot them.

I added a poem to “Musubi Izanagi Izanami”. 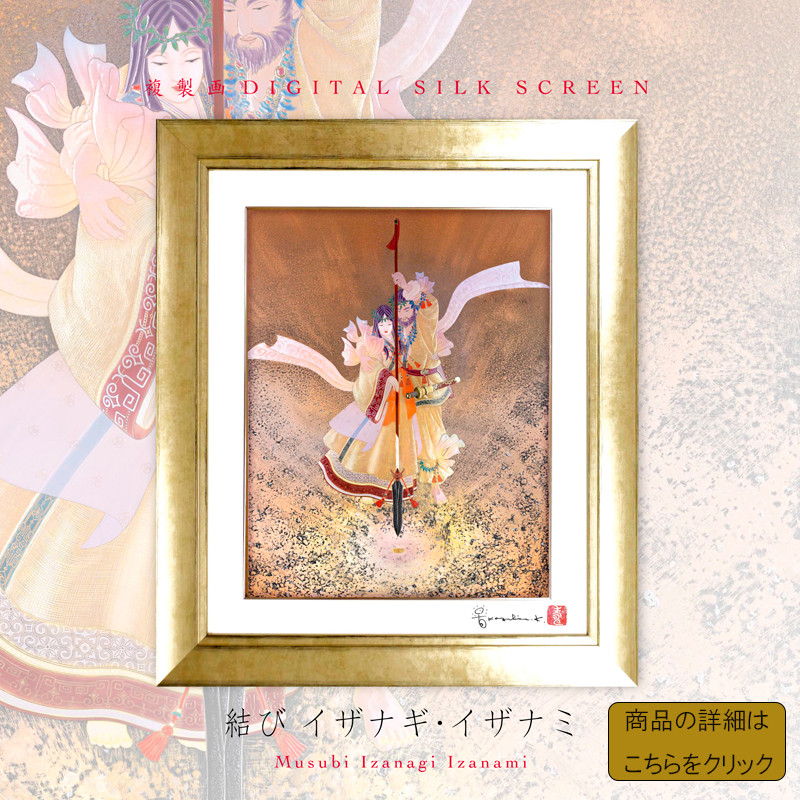 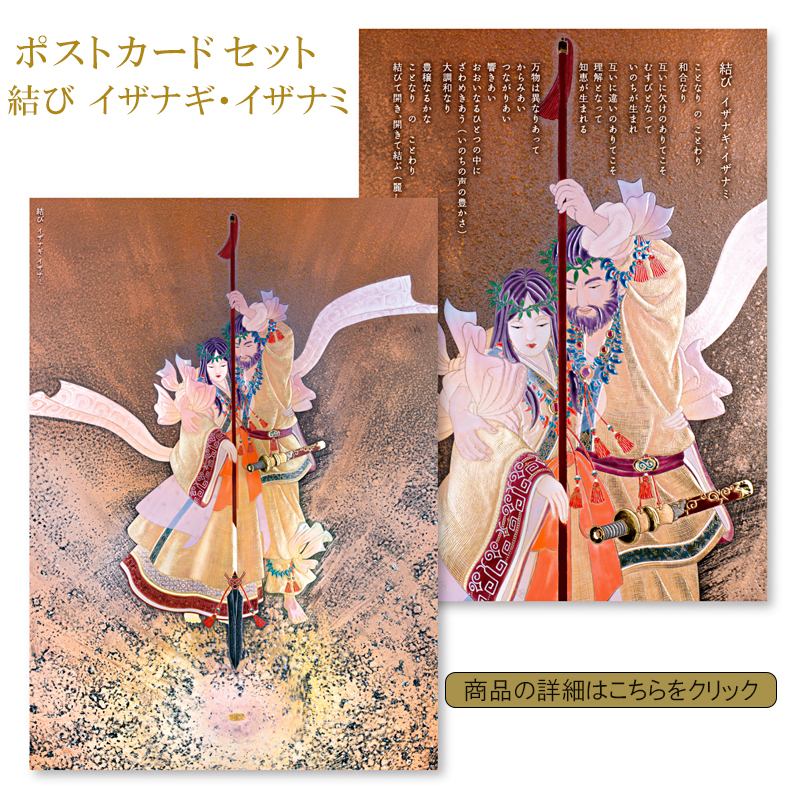