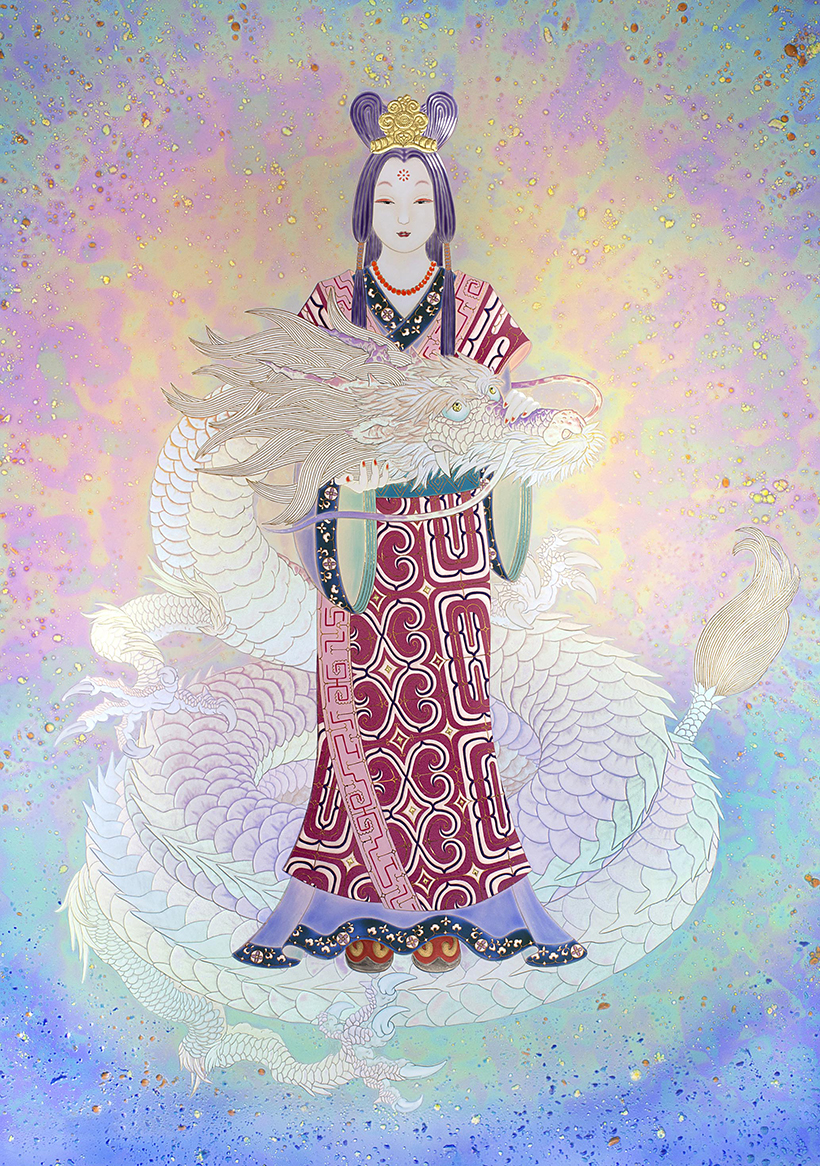 – The goddess attracts the soul

Oharaeno-kotoba is a Shinto prayer that have continued since Kamakura period and is recited to purify and calm the prevalence of infectious diseases a natural disaster.

She is a goddess with a lot of mystery. She appears in “Hotsumatsutae” which was said to be a forgery and “Fudoki”, but not in any formal history books at all.

I’m attracted to something deeper about her, not just as a motif for my work.

I can explain in this way; when I pick a history as a theme like Seoritsu-hime who does not appear in a historical record or myth, I am ultimately looking for a memory in my soul.

I create something not because it doesn’t exist but because there is something; I believe that it can be expressed as a from because it is in our soul,our heart and the subconscious.

Since she does not appear in history, it is unavoidable to be said that she is just a made-up.

However, I am sure that she does exist when I ask the soul in me.

What kind of existence she is, what kind of role she has, and how she appeared in a story. I believe the answer to those questions lies in my soul as its memory.

I think that the attempt to figure out if myth is a reality and true history is just a kind of captivity.

Because a myth is to respond to what is inside in it without being constrained by outside, knowledge.

It is so called the foundation of our spiritual world that has been passed down from generation to generation.

Now we are on the turning point of times, I think it is time to face the history and at the same time, to listen reverently to the messages from the soul (myth) inherited so far.

I think that the origin of this prayer; to recite Oharaeno-kotoba when something happened to the nation, was actually for gods of vengeance.

When they were unifying Japan as a nation, they exploited Jomon people who were originally there and made them up as demons for justification; Nagasunehiko, Emishi no Arutei, Arahabaki etc…

They justified what they were doing as demon slaying.

But for the goddess, I have a slightly different feeling and interpretation.

In the Jomon period, I imagine that they had a system where a female called “Miko (a shrine maiden consecrated to a god)” and the king ruled a nation together.

For instance, once in okinawa there was a group of some Miko reigned by Kikoeno-okimi on top of the king, receiving oracle from gods and governed the nation.

In addition, a mysterious queen named Himiko who received oracles from gods appears in “Gishi-wajinden (chinese history book about ancient Japan)”, and the king used them for politics which seems similar with the above-mentioned system.

Without a existence of Mikos, they could not rule the nation.

I think Seoritsu-hime was welcomed as a princess not only for assimilation policies but also she had considerable power as a Miko.

Otherwise, she could not have gained as much faith as she has today.

But at some point, she was sealed by the power of the time and buried from history.

That’s why we are afraid of vengeance.

In another word, the goddess had became a god of vengeance.

If something happens, people visit the shrine with a fear for vengeance.

I feel that is the origin of Oharaeno-kotoba.

There used to be a lot of shrines of Seoritsu-hime, but it appears in history that there was work to hide and vanish them by the beginning of the Meiji era.

It seems that the strategy was taken to erase the existence, such as changing them to Benzaiten (god of wealth) or Ichikisima-hime (god of water).

It should be recognized that there was such a story behind the scenes in the history of Japan.

The sensibility of seeing gods in a big stone or a great tree is the Jomon sensibility that can not be forgotten even if the Japanese are mixed with the people from the continent, and it is the one that shapes the world view.

A world where nature, people, and gods are living together.

Awe, gratitude and prayer for the spirits (life) of all things.

I think such a sensibility is about to be revived.

That’s why Seoritsu-hime and Ryujin(dragon god) are inspiring the hearts and souls of many people.

I think that such an age has come.

Many people were sacrificed to build this country Japan.

It is also in a distant history, and in recent great wars, people who were burned in the atomic bombs and air raids in Hiroshima and Nagasaki, and those who died starving on the islands of the southern front.

Repeating earthquakes and disasters, flood damage that occurs one after another and the spread of infectious diseases that are shaking the world evev the new eara, Reiwa has began.

I can’t help but wondering that the adesthes of the victims have not been cleared yet.

How does the grudge of the people who are made to be “”demon”” under the flag of justification for nation’s unity clear up?

How do we regain peace in souls of the people who have died without a pity?

I believe those are our asignment in Reiwa period.

We seem to have nothing to do with them, but our lives have become possible through all our history.

No one was created outside of the history.

If we can live lightly and cheerfully today, it is because of all the lives and every life that has died.

What is purity? What is the exorcism of sin? What is vengeance? I ponder.

And I end up thinking before peace and love, we don’t need justification, justice and strategy.
It can only come true in the spirit of “harmony”.

I’m sure the goddesses are about to wake up because we know it well with our individual souls.

Prayer for peace with the production of Seoritsu-hime.

March 10, 2021 Latest embossed lithograph “Seoritsu-hime” has come!
Please enjoy the beauty of Seoritsu-hime and the shine of the dragon that changes to seven colors! ! 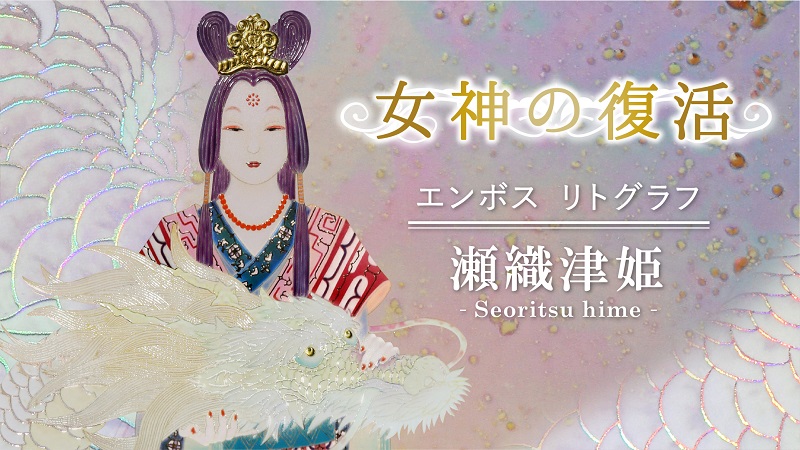