In human history, there have been critical situations such as epidemics, hunger due to bad weather, major disasters, and economic depressions.
I see these as a signal that times change.

The Covid-19 spread all over the world in no time at an ever-larger scale and speed.
I think that this vast spread of the Covid-19 which only one person developed in Wuhan, China is truly a proof that "the world is connected".

And we don't know when such a thing will happen again.

Because the earth is alive.
Maybe another earthquake will happen to Japan. No one knows.

However, such a thing is repeated many times in the history of earth.
It is time to look earnestly at the origin of the way of life as human because it is a big turning point now.

In Shinto, there is something called "Yuniwa -inaho no Shinchoku (oracle of Yuniwa -inaho)".
Yuniwa is a sacred rice field dedicated to the gods in Takamagahara(heaven).
When Amaterasu Omikami entrusted ruling of Japan to Ninigino-mikoto, he allowed an ear of rice plant from Yuniwa to raise them on earth.

I think that this "Yuniwai-inaho no Shinchoku" is a teaching that the Yamato people, people of Japan, should live a way of life centering on farming.
In accordance with the teaching, the Emperor also harvests rice in the imperial palace every year.

And now, it is said loudly to "stimulate the economy", but from now on, what will be the top priority in the world is how to "nurture and connect lives" first rather than the economy.
I think stabilizing "food, clothing, and housing" is the most important thing in order to stabilize the country.

"The poor can't afford manners."
It is a saying, which my father often used.
He used to say, that human can learn manners; spare the effort to do something extra for others, only when they have food, clothes, a roof above head to prevent rain.

What is happiness?
When you think about the essence, the ideal such as having a good car or a good house is not a priority matter.
First thing first, is to eat enough, wear clean clothes, and have a house where you can stay away from rain, cold or heat.
However, even such a fundamental point is now falling apart.
We have to cooperate to make a situation where all of us feel happy just to live a life even if we have debts or any other obstacles.
For that reason, what I'm worrying about the current situation in Japan the most is the low food self-sufficiency rate.

Even if this Covid-19 converges, a similar situation will come someday.
In order to prepare for the future, it is necessary to quickly create a situation in which we can "protect everyone's lives", not "self-sufficient" for an individual but for a whole community.
Japanese myth tells you about such things at the very beginning.

In the myth, when the country was founded, the country we now call Japan is introduced as rich and beautiful "Mizuho's country (Mizuho no Kuni) of Toyo Ashihara" where people lived as farmers and had a lot of food to share with everyone.
I take this as a teaching and eve as a caution.

That's why Amaterasu Omikami I had drew has rice ears in his hands instead of Three Sacred Treasures (Mirror, Sword and Jewels).
His figure that comes out with rice ears is a symbol of the philosophy of the founding Japan and a symbol of the ideal world.
Now is the time to review our original philosophy, learn from myths about the messages entrusted by ancient people, and use them as a catalyst for building a better country.

The god we are introducing this time is Susano-o, the younger brother of Amaterasu Omikami.
He is one of the most popular gods from mythology and a favorite of those who frequent shrines.
After the story of Izanagi and Izanami in Yomi no kuni (the nether world in Japanese myth), Susano-o was born as the last god when Izanagi performed ablution.
The story she gave a birth to Amaterasu Omikami through her left eye, Tsukuyomi from her right eye and Susano-o from her nose, is indeed strange and also interesting sounding suitable for Japanese myth.

And later, Tsukuyomi stopped appearing in Kojiki (the oldest history book of Japan), but Susano-o often appears in the history how the country of Japan was built.
There are words "Amatsu-kami (gods of heaven)" and "Kunitsu-kami (gods of land)", but I think that "Amatsu-kami" is like the cabinet, a political group that ruled Japan to build an ideal country.
Some people say that they are the people from overseas and others say that they are the people who were originally in Japan.
There are various theories.

And what I also think is that "Kunitsu-kami" is the people who were originally lived in the local ares (indigenous people), and that Susano-o was given the most unlikable job to gather and conquer them to follow the county.
That is why he always cries for Takamagahara (heaven) in the story.
It must have been a tough role to fight a lot battles, just like an army general.
I believe there must have been a lot of battles because some people would not "harmonize" until the end even though there must have been some small tribes that cooperated.

However, there is no choice but to do so anyway because it is an order from heaven.
In those situations, there should have been encounters with people who live with nature and people who are full of humanity.
Susano-o may have felt uncertain though he was aware of his role.
There must have been times when he had to be ruthless and soulless, and times when he could not escape.

I expressed those things in my work "Ameno-murakumono-Tsurugi Susano-o".
In history, he bravely and boldly exterminates Yamatano-orochi at the end, and marry Kushinada-Hime.
This Yamatano-Orochi might mean the people who originally lived in local areas as "Kunitsu-kami" who believed in dragons and snakes, or it might represent that he calmed the flooding of rivers for people suffering from river management.
There are several understandings to it, but most importantly, Susano-o followed the order of heaven and had done jobs that no one would want in order to rule the country.


- To the heaven with Ameno-murakumono-Tsurugi

In the story, Susano-o defeats Yamatano-orochi cutting its tail with a sword.
It is called Ameno-murakumono-Tsurugi or Kusanagino-Tsunagi, but I had been pondering what kind of shape it could be.

Kusanagino-Tsunagi is said to be in Atsuta Jingu Shrine, but according to legend, there was a priest who peeked it, and it looked something that had never been seen before but nothing like a weapon.
I had learned about iron sword with a wavy bent blade called "Dakou-ken (Meandering sword)" excavated in Kagoshima and Kumamoto, and drew Ameno-murakumono-Tsurugi in such a way.

"Dakou-ken" have been excavated as burial items from the ancient tombs of the Tumulus period (Kohun perid) in total case of 70, and people currently research them as mysterious iron swords because the total number is extremely small.
Except for one case in Korea, there have been no reports of overseas artifacts from the same era, and it is an ancient relic that only deepens the mystery.

It is guessed that they were domestically made of iron by Tatara
It could be the sword of "Kunitsu-kami" who originally lived there.
Just as Japanese swords are samurai souls, "Dakou-ken" could be the souls of indigenous peoples.

Susano-o presents Ameno-murakumono-Tsurugi, which could be his soul, to the heaven with wish for the country with no fight ever again.
And that is the work I drew for the very scene, "Ameno-murakumono-Tsurugi".
In order to build a country,I had have to end the relationship with people I had met in painful and sad ways, and I had incurred many people's enmities, but I don't want such things to happen to anyone anymore....
Harmony is to be valued.

The story I have behind this picture is that Susano-o understood it from the core to save all the souls of everyone of "Kunitsu-kami", and he gave himself to heaven with the sword.
I think this is the first spirit of the nation-building, "harmony" that we should inherit forever.
That is how I took consideration into the myth to pray for eternal peace. 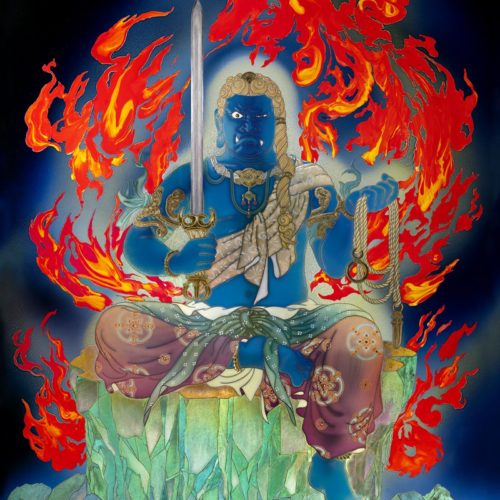 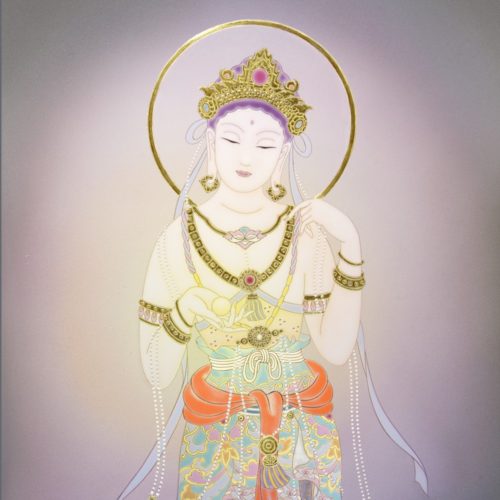 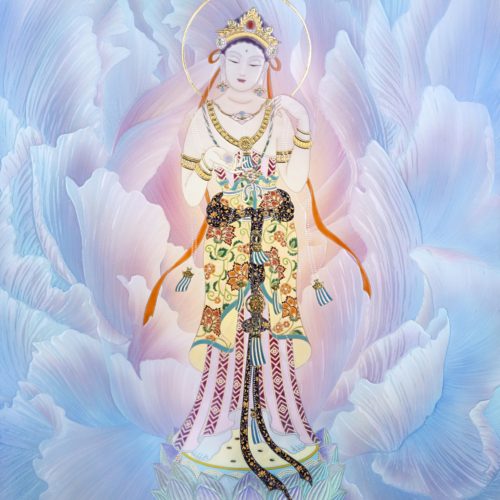 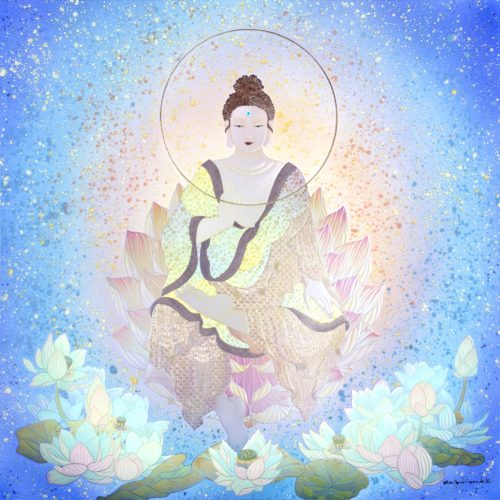 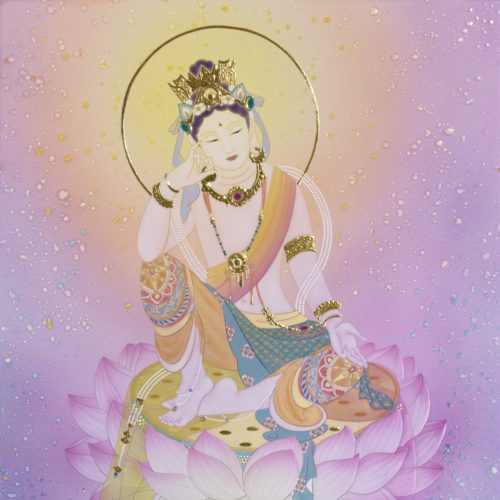 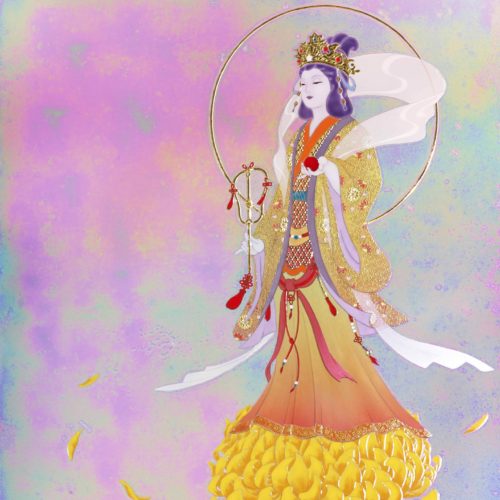