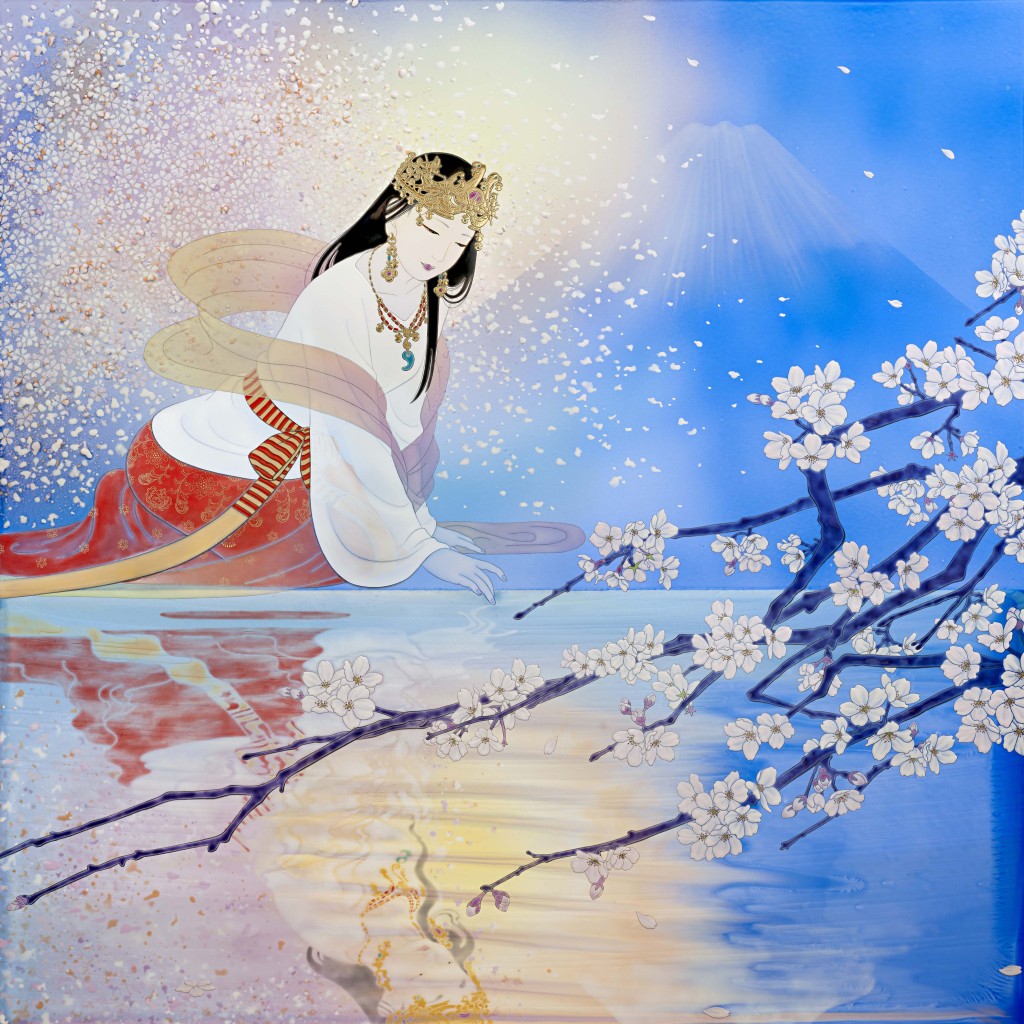 Oyamazumino-kami, who was born as one of gods from a married gods, Izanagi and Izanami who also bore a nation, had a beautiful daughter named Konohasakuya-hime.

Ninigino-mikoto, the grandson of Amaterasu Omikami, is fascinated by her beauty and asks for marriage.

“I married my two daughters to you with a pledge that your life will be as long as one of a rock when you make Iwa(rock)naga(long)-hime your wife, and if you make Kono(tree)hana(flower)sakuya(bloom)-hime your wife, you will prosper as blooming flowers on a tree.
If you only marry Konohanasakuya-hime, your life will be as ephemeral as a tree flower. ”
And that is how Ninigino-mikoto and his descendants lost their eternal life as God.

There are various theories about what the gods of mythology are, but Kazuhisa Kusaba interpreted Oyamazumino-kami as a mountain itself rather than a god who governs the mountain.

The mountain stores water that has come down as rain and snow, contains minerals and nutrients, and transports them to the lands through rivers.

Like a heart in a human body, mountains serve as pumps that circulate water and nutrients.

Oyamazumino-kami is a god controls the circulations and is the mountain itself with those functions.

And Konohanasakuya-hime born from the god of the mountain symbolizes the ephemeral beauty like tree flowers, that is, a glory of a generation, while Iwanaga-hime symbolizes life itself, the eternal life that circulates.

In fact,he had to receive both of them in whole, but because he rejected one of them that become the front and the back and split what was not supposed to be split, death was born.

I feel that distinguishing between “beautiful and ugly” or “good and bad” is because we are trapped in the material world.

The “visible world” we see through the five senses is only the material world.

And if you look into the material world from a micro perspective, you can see a structure similar to planets around the sun, where electrons orbit the nucleus.

Furthermore, it was a world smaller than 10ˉ¹⁹ mm, a world of elementary particle was discovered just before the 20th century.

In the single-word expression of “things”, there is an infinite space and mystery that could be seen is universe.

Even if an object can only be recognized as a still life by the five senses, it is actually a wave that continues to move at super high speed, a mass of energy.

The energy that shapes all things and fills the world is to make living things and still lives exist as individuals, and to connect each other and circulate life.

It could be the will itself to create all things. Some people call it God, the Great Universe, the Almighty, the Creator, and so on.

If we call that energy “God,” each of us is derived from god itself, and we may call us “the trembling of God” or “the sound of God.”

In other words, “invisible world” which can be said to be the hidden truth of the “visible world”, is filled with “the sound of God.”

We are usually trapped in the stereotype of the “visible world”, and we may have forgotten the true from of “the sound of God”.

The myth of Konohanasakuya-hime and Ninigino-mikoto seems to be a commandment to dividing something originally a while into two.

It is a commandment to values that rely only on what is visible forgetting that the invisible sound of God shapes everything.

Konohanasakuya-hime’s Tosaiga was created to express that we ourselves are the sound of God itself and that we have the world of God inside us.

A real appearance is not reflected in a swaying surface of the water.

The surface of the water is the very mind that tries to face you, and if that mind is distorted or rough, it may mean that you can’t see your true self.

On the right is a cherry blossom tree, a symbol of Konohanasakuya-hime.

Its heyday with beautiful flowers is short, falling down before you know it as to make you sad, but it starts preparing to bloom the next flower from the time it scatters.

We will graduate from this world eventually as ones with bodies, but it can be said that we exist forever in the circulating life as long as the sound of god itself creates the bodies and spirits.

Konohanasakuya-hime has another impressive episode.

She conceives first night of marriage, but Ninigino-mikoto suspects that it is not his child.

In order to prove her innocence, Konohanasakuya-hime set fire to the maternity room with a pledge that if a child was his, it could be given birth.
And she safely gave birth to three children in the flames.

The story seems to be telling that If you think your are just the body then you are only mortal, but if you realize that you are a spirit and the sound of God itself, the world can be upside-down.

It is your mind that holds yourself as a dying existence.

“If you realize that you are Hotoke(Buddha) itself, there is no need to pray for Amida(Buddha). No Pure Land outside your mind.”

The extreme ideal of martial arts is to let go ‘enemy’ who you are confronting off your mind, instead of actually defeating them.

I often hear that “now is the time for harmony”, but things are originally connected and harmonized already.

It is the heart that believes that this world is a material world to create difficulties and problems.

The real world is the very sound of God, where the two poles of Yin and Yang balance.

I think it is the time to accept and embrace them as a whole in harmony rather than distinguishing and eliminating.
What I wanted to describe in Konohanasakuya-hime is “a pair Yin Yang of two phase” in a word.

Yang and Yin are the opposite of each other, but only when they are aligned to create an element.

It is the same for beauty and ugliness.

Beautiful Konohanasakuya-hime and ugly Iwanaga-hime make a loving life only when they are together.

Just like the swaying surface of the water does not reflect a real figure, the swaying mind leads us to follow an illusion and believe in only what can be seen to make you forget the reason of two-phase pair.

I want to love all life quietly as the sound of God itself.
Kazuhisa Kusaba Studio 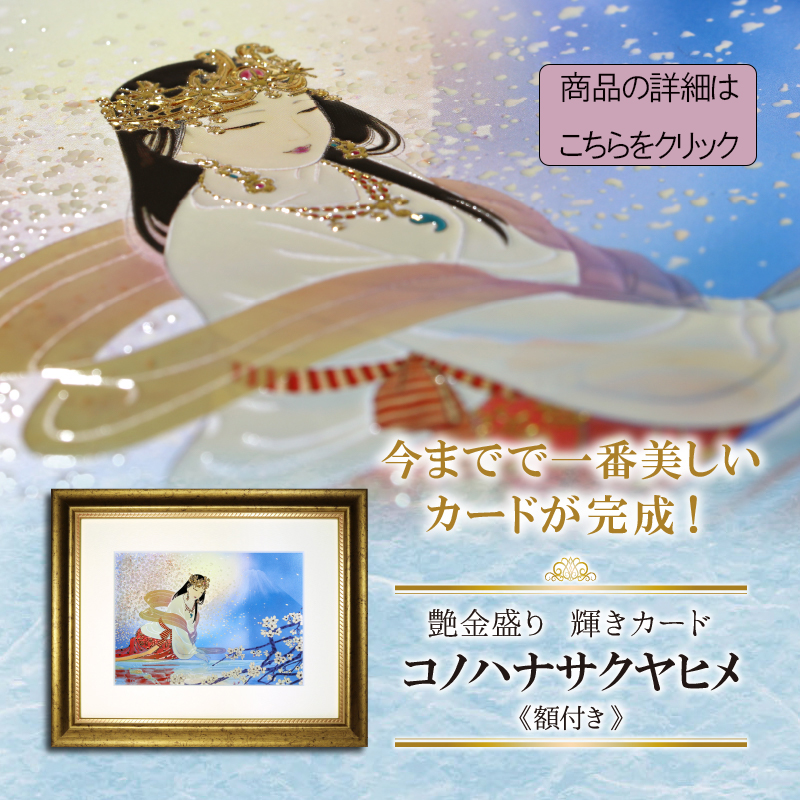 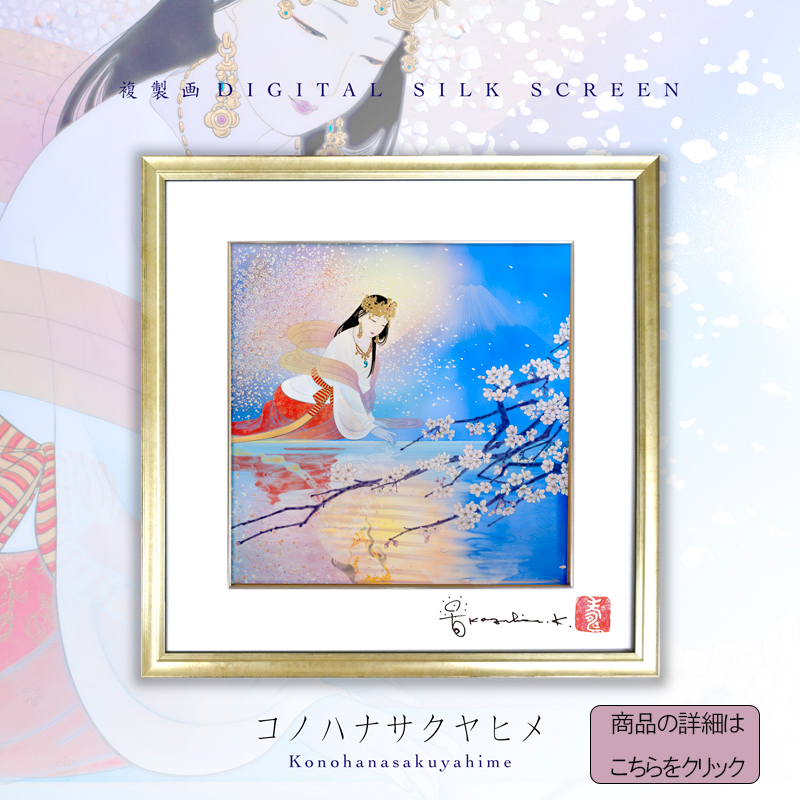 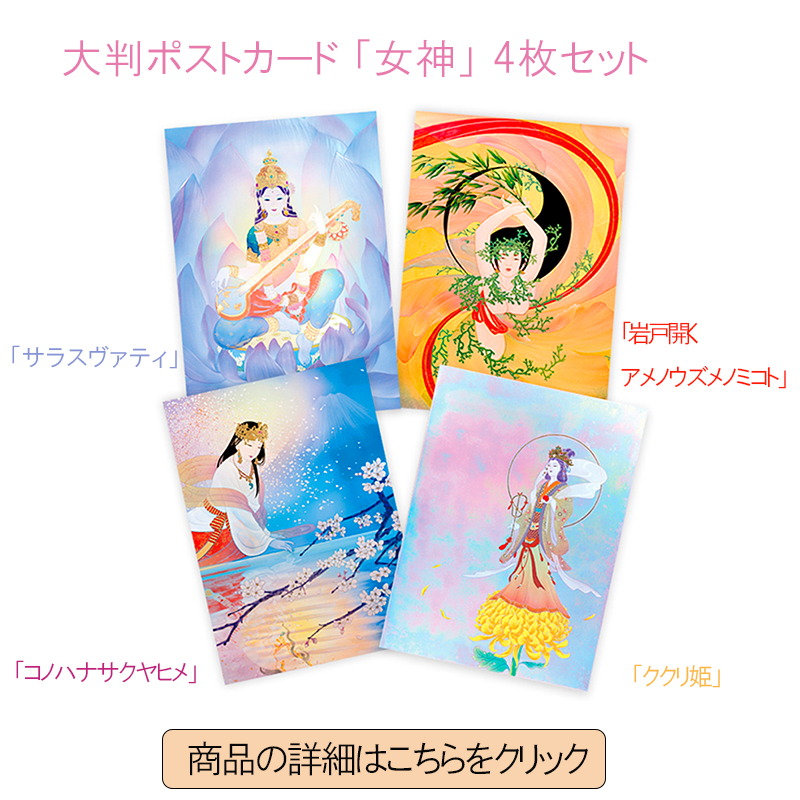